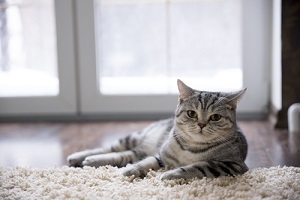 Research concerning Toxoplasma gondii conducted by Dr. Thomas Cook of the Mercyhurst University Department of Public Health, along with colleagues in Maryland and Germany, was recently presented to the Food and Drug Administration.

The study presents evidence that this protozoan found in feline feces is a much larger problem than considered in the past.

The parasite causes toxoplasmosis in humans and some animals, a disease Cook says has been ignored too long. Cats deposit an estimated 1.2 million metric tons of feces annually in the United States alone, and between 30 and 50 percent of people worldwide are exposed to T. gondii.

Healthy humans show no symptoms and are essentially carriers of a latent infection, but those with weakened immune systems can become seriously ill. Latent infections can lead to severe psychological issues, ranging from subtle behavior and personality changes to heightened aggression, obsessive-compulsive disorder, and schizophrenia. In some cases, toxoplasmosis has even been linked to brain cancer, rheumatoid arthritis and trouble for kids in school.

With such adverse effects, it seems obvious that Cook’s work should get the FDA on its toes, ready to work for treatment and a possible cure for toxoplasmosis, as well as finding ways to dispose of cat feces to avoid exposure to larger numbers of people.