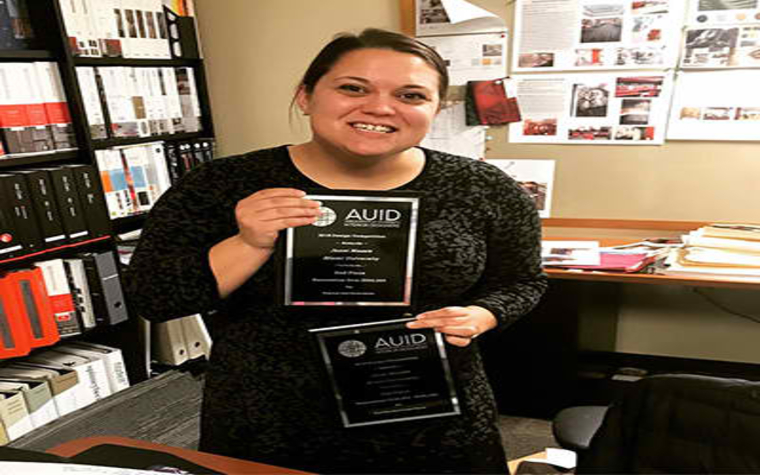 Miami University interior designer Janet Massie always knew she would end up in a creative field of work. And, when she chose to major in interior design, it ended up encompassing a lot more than what she saw on HGTV.

For both winning projects, Massie worked alongside project manager John Porchowsky, who gave her the freedom to ask questions and explore different layouts.

Every day is different for Massie. While designing, discovering new ideas along the way and figuring out how to utilize resources efficiently are exciting parts of Massie’s career, nothing compares to watching her clients see the finished projects.

“Once the [field hockey project] was finished, I had the opportunity to get to see their faces when they walked in for the first time, which was pretty magical. They were just so happy and appreciative of having a new space,” said Massie. “Moments like that make me proud of the work that we can accomplish together at Miami.”

Massie grew up in a rural farming village with limited entertainment options.

“I guess you could say that it forced me to have a big imagination. I was always exploring, creating, doodling or journaling,” said Massie.

Massie graduated from Miami in 2013 with her bachelor’s degree in interior architecture. As a student, she was involved in the International Interior Design Association, Student Advisory Council and the social sorority Alpha Omicron Pi. Massie also spent a summer studying architecture and interior design at Yeditepe University in Istanbul, Turkey.

Massie worked as an intern in Cincinnati at the Interior Design Co-op and an intern with Décor Design in Charleston, South Carolina, before joining Miami’s interior design team as a project manager in October 2015.

Since she first chose to major in interior design, Massie has never stopped learning and evolving from her own experiences.

“Having a platform to use my creativity is very important to me. I am constantly wanting to create and being an interior designer at Miami gives me the medium to do that. “