UNIVERSITY OF MARY: Jacobson returns to University of Mary after gaining NCAA Division I coaching experience 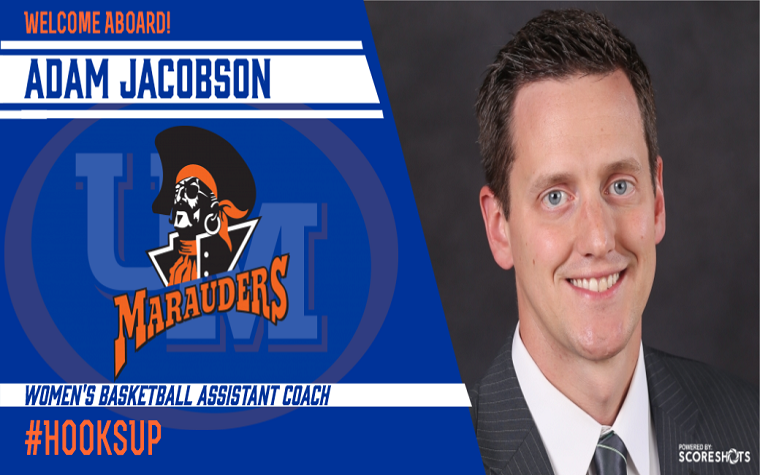 University of Mary issued the following announcement on July 16.

Adam Jacobson, a familiar name to University of Mary women’s basketball followers and fans across the state, returns to the Marauders program as assistant coach. Jacobson spent four seasons at his alma mater, NCAA Division I University of North Dakota. Jacobson helped UND to a Big Sky conference championship and three post-season appearances as an assistant head coach for the Fighting Hawks.

Prior to joining UND, Jacobson was an assistant coach for the Marauders for two seasons from 2012-14 and worked alongside Marauders Head Women’s Basketball Coach Rick Neumann. During those two seasons UMary won 36 games and advanced to the second round of the Northern Sun tournament both times.

“We are extremely fortunate to bring Adam Jacobson back to the University of Mary,” said Marauders Head Women’s Basketball Coach Rick Neumann. “Adam was at UMary for two outstanding seasons when we finished in the top three of the North Division and hosted three home playoff games. His time at North Dakota exposed him to new recruiting areas and contacts and helped him grow tremendously as a coach.

“This is a great time for him to come home as we field a team that will contend for a Northern Sun championship. Adam’s knowledge and work ethic will help take our program to a higher level. It’s an unbelievably exciting time for our university and Adam’s addition to our staff only adds to that excitement. We can’t wait for him to hit the ground running and begin recruiting student-athletes to our university.”

“I would like to thank Monsignor James Shea, Athletic Director Dale Lennon and Head Coach Rick Neumann for the opportunity to come back to the University of Mary,” said Jacobson. “My time spent here four years ago was second to none and I look forward to teaming up with Coach Neumann for a second time as we look to get back to the top of the Northern Sun.”

Highlighted by a Big Sky Conference co-championship and a 20-win season in 2016-17, the Fighting Hawks posted three winning seasons in Jacobson’s four seasons at UND (2014-18). Also the recruiting coordinator and game scheduler, UND compiled a record of 68-58 overall and 42-30 in Big Sky action that included a 2nd place finish in 2015-16 in addition to the 2016-17 league title. The Fighting Hawks twice were selected to the WBI Invitational (2015, 2016) and earned a WNIT automatic berth in 2017. Among Jacobson’s recruits was Lexi Klabo, who earned Big Sky first team honors.

In his first season at UMary in 2012-13, the Marauders finished 19-11 overall, placed second in the NSIC North, won an opening round game in the NSIC tournament and advanced to the conference quarterfinals. The 19 wins equaled the school record for victories during the program’s NCAA era. The following season, UMary finished 17-10 overall and 3rd in the NSIC North in 2013-14—again winning in the conference tournament opening round and advancing to the NSIC quarterfinals as senior post player Linda Murray claimed All-NSIC honors.

Prior to joining the Marauders staff, Jacobson was the women’s assistant coach at Gillette College, in Gillette, WY, for the 2011-12 season and helped guide the Pronghorns to a record of 20-12, their first 20-win season in program history. The Pronghorns also posted their first Region IX tournament victory.

Jacobson was the top men’s basketball assistant at Jamestown College in Jamestown, ND, in 2008-09, where he was also the head men’s and women’s golf coach. Under Jeff Trumbauer, Jacobson helped the Jimmies to a strong finish in the Dakota Athletic Conference (DAC) before moving into the private sector for a couple years.

A native of Fargo, ND, Jacobson began his coaching career in 2006-07 as assistant at Scottsdale (AZ) Community College under Paul Eberhardt. While at SCC, Jacobson helped the Artichokes to one of their few winning seasons in school history. The following season Jacobson was a graduate assistant for Tom Billeter at Augustana College in Sioux Falls, SD. The Vikings finished the 2007-08 season 22-9, the first 20-win season for Augie since 1988-1989. Augustana advanced to the second round of the Division II National Tournament.

Before graduating from Fargo’s Shanley High School in 2001, Jacobson helped the Shanley High Deacons win a state title as a freshman in 1998 and averaged 21.5 points, 8.5 rebounds and 5.0 assists per game as a senior. Jacobson began his collegiate basketball career at NCAA Division I Northern Iowa, where he played for Greg McDermott and Ben Jacobson. After his freshman season he transferred to the University of North Dakota and averaged over 10 points per game as a senior for Head Coach Rich Glas. In 2006, he earned his bachelor of science degree in physical education/coaching from UND.