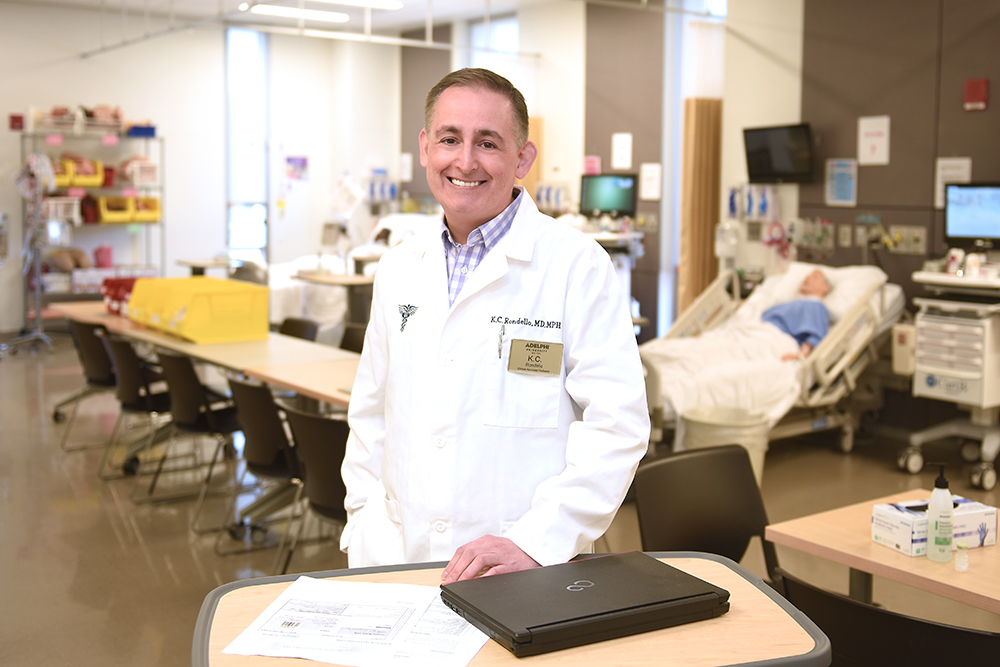 K.C. Rondello, MD, is an authority on disaster epidemiology.

COVID-19 poses a novel threat for three reasons: People do not have a natural immunity to it, there is no vaccine to prevent it, and there are no proven medications to treat it.

As K.C. Rondello, MD, clinical associate professor in the College of Nursing and Public Health, said, that leaves only one strategy for confronting the virus.

“Public health measures are the last tools we have in the toolbox,” he said. “The things we normally do to prevent disease are always important, but they take on particular importance when we don’t have other strategies at our disposal.”

Dr. Rondello is one of a number of faculty members in the College of Nursing and Public Health who are responding to the coronavirus crisis by helping inform the public, working with government officials on disaster planning, and preparing students who will soon be on the front lines.

Joining the Battle on Four Continents

Maria-Pilar Martin, MD, assistant professor and director of the Master of Public Health program, is working to bring lifesaving information to people around the world. One of her main focuses is her home country of Spain, which has been particularly hard-hit by COVID-19. She is working with the Spanish Medical Association and the Spanish Society of Epidemiology to recruit physicians and healthcare professionals to join response efforts. She’s also working with the organizations to provide information to public health groups in Africa and Latin America, while at the same time serving as a moderator providing basic, evidence-based information on Facebook España.

Dr. Martin is busy in the United States as well, concentrating on informing the Hispanic community as a member of the American Public Health Association.

Dr. Martin is also providing bilingual awareness and prevention materials directly to Hispanic communities as executive director of International Health Connection, a nonprofit devoted to public health and health education she founded after serving in Haiti in the aftermath of the 2010 earthquake.

Still, she regrets not being on the front lines in Spain. “I would love to be there, but I have my classes to teach,” she said. “We have an ethical and moral responsibility to do our part. Each of us can contribute and support first responders in our own ways.”

Planning for the Unthinkable

David R. Williams, EdD, clinical assistant professor and director of Adelphi’s emergency management program, is another. A member of the New York State Incident Management Team, he has extensive experience in planning for disasters and responding to them.

“I get briefs from Albany on a daily basis,” Dr. Williams said. “Normally, I’m in the second or third wave of responders and am called in when state employees are exhausted. I anticipate that will be within a month’s time, so I’ll have to be up to speed as soon as the call comes.”

Dr. Williams has been working on the response to the virus since January, when he was called to Albany by the New York State Division of Homeland Security and Emergency Services to work on long-range planning. It was clear even then that the virus posed an extraordinary threat.

“I worked on developing a three-hour course for municipalities on how to manage mass fatalities,” he said. “You can see that there is a response component to disaster planning, and there’s a component that goes beyond that. That gives you an understanding of how serious this situation is.”

Preparing the Next Generation of Responders

Like Dr. Martin and Dr. Williams, Dr. Rondello is continuing to teach classes as instruction has moved online during the pandemic. He is currently teaching Health Management in Times of Disaster, a core course for graduate students in emergency management and an elective for students in the Master of Public Health program.

“I have shifted the focus of the class so that, virtually in real time, we can discuss the current epidemic and the ways in which what we learned earlier in class applies,” Dr. Rondello said. “It’s like a living laboratory for students, where they can see much of what we’re talking about playing out in real life.”

Dr. Rondello said that students are finding that public officials are managing the crisis in the prescribed ways.

Dr. Williams agreed. “Students are noticing the way the National Incident Management System and the National Response Framework are being played out in current events,” he said. “Counties, states and the federal government are working together the way the textbook says they should—with some personalities thrown in, as is always the case.”

The faculty members are also receiving similar messages from graduates of the public health and emergency management programs.

“Since this epidemic started, I don’t think a day has gone by that I haven’t gotten an email from a former student who says they’re using what they’ve learned at Adelphi in their jobs,” Dr. Rondello said. “They tell me that everything is playing out precisely as we envisioned in class. That makes them feel that they’re ahead of the curve in understanding what the priorities are in dealing with the COVID-19 crisis.”